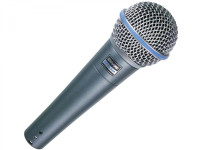 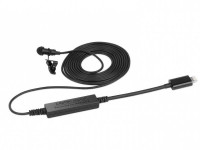 ClipMic digital is a high-quality lavalier microphone for iPhone, iPad and Mac that features Apogee digital conversion and Sennheiser microphone capsules. Whether you are a journalist looking for an easy audio solution for field interviews, a lecturer that wants to record a talk, or even a parent recording their child reciting a poem – Apogee’s digital clip-on lavalier microphone helps you to capture sound professionally. ClipMic digital combines Apogee’s A/D conversion expertise with Sennheiser’s microphone design knowledge to give users optimum sound quality for their recordings. Especially designed for iOS-devices, ClipMic features a Lightning connector to directly connect to iPhone®, iPad® and iPod® Touch, thus creating high-quality, ultra-portable solutions for vocal and speech recordings.

Welcome to the professional world. The PG ALTA series promises to provide professional performance at an affordable price, thanks to affordable, quality products. The PGA48, the gateway to this range of microphones, is recommended for spoken word and karaoke recording. It's all there! Delivered with its microphone clamp, carrying pouch and XLR cable, the PGA48 offers an economical and functional all-in-one solution. Take it everywhere with you! Its on/off switch makes it easy to use during your speeches or karaoke nights, and its robust construction will ensure a real longevity.

Shure quality, accessible to all. The SV Series is Shure's entry-level brand of accessible, easy-to-use microphones. The SV100A is the perfect companion for standard speech, home recording, and other applications. Convenient and functional. Supplied with its microphone clamp and jack cable, this microphone plugs into any stand with a jack input. It's as simple as that! And it's ideal for those who simply want to amplify a voice. In the beginning was speech. If you were looking for a functional entry-level microphone for speech, you've found it! The first step into the Shure world, the SV100A offers everything you expect from a microphone when you speak, including clear voice reproduction and an on/off switch that mutes on demand.

The undeniable reference. The SM58 is the world's #1 choice of musicians, the most versatile and reliable vocal microphone in its class. It can be found on every stage, in every school, in every studio on the planet. Propelled to iconic status by countless artists over the years, Shure's famous microphone celebrated its anniversary in 2016. 50 years, and not a wrinkle! With legendary Shure build quality, the SM58 has become a true reference. The numerous videos of tests in the most extreme conditions are proof of this: here you have a microphone that adapts to all environments and all situations. A bit of history, though. The SM58 is THE microphone that everyone knows. If you ask musicians to name a vocal microphone at random, 80% will tell you without hesitation: Shure SM58! But where does this craze and fame for the successor to the 565, released in 1966, come from? The initial idea of Shure engineers was to address studio issues. The microphones of the time were very bright, dazzling because of the studio lights, and had a short life span due to their fragility. Ernie Seeler, with the help of his team, created the world reference for stage microphones by responding to these problems. But let's raise the hood instead... Since its launch, the SM58 has undergone numerous evolutions while preserving its inimitable sound. Mounted on a patented shock-proof air suspension, its Unidyne III cardioid dynamic capsule incorporates all the current standards of technology that make its reliability and longevity legendary. With numerous improvements: the grille, diaphragm, magnet, paint, connectors, clamping screw... So many modifications that have nevertheless preserved the identity that made the success of its beginnings. Ideal for lead vocals and backing vocals, but also for DJs and entertainers, the SM58 allows the main sound source to be highlighted while rejecting background noise. Its live performance in difficult environments is not the least of its strengths. The undisputed icon. The SM58 is now found on most concert stages, rehearsal halls and music schools, but it is live and on stage that the SM58 has truly earned its reputation. There are countless photos of international artists and bands from all musical backgrounds and universes taken with the famous microphone. Its story is above all that of all those musicians who one day had it in their hands. That's how you can recognize an icon.

Efficiency and versatility mutated into a microphone! Together with the SM58, the SM57 forms the most well-known pair of dynamic microphones. Its optimized frequency response and extremely efficient cardioid directionality are ideal for picking up brass, wind, amps, drums... among many others! Robust and resistant to the most difficult conditions on stage, it fully ensures the sound reinforcement and the recording of various sound sources. The presidential microphone, please! Beyond its musical performances, the SM57 has earned international renown through its use in speeches by US presidents since 1965. For it is indeed a pair of SM57s, with two bonnets, that have been overhanging the desks of American presidents for several decades. The robustness of its SM directional capsule provides clear and precise voice pickup in all conditions. From Lyndon B. Johnson to the current president, all speeches have been transmitted using this microphone. A reference. Indispensable, to say the least... Its easily identifiable design can be seen on stages all over the world. If you see a copper section, the SM57 will never be far away. An amp picked up by a microphone? You will surely see it. A zoom on the drums? It will be close to the snare drum or toms. This mic is a real asset for musicians. It is used for so many things, in so many situations, that it has just become indispensable.

It's sold out! Following the success of the MV88, the American brand unveils here an evolution of its famous iOS microphone: the MV88+. Compatible with Android devices via USB-C and iOS using the Lightning connector, the MV88+ can be positioned on its Manfrotto table tripod, or directly on a smartphone thanks to the support provided. The stand allows many different microphone placement possibilities to adapt to the various possible uses (film, home video, interview modes...). The tripod can also be used as a handle, and a windscreen is included for possible outdoor use. The MV88+ is compatible with the standard A25D microphone clamp. Mass adjustments! Combined with ShurePlus Motiv and ShurePlus Motiv Video applications, the MV88+ Video Kit provides a multitude of settings, gain, and directionality, with a variety of preset DSP modes. The included storage and carrying pouch keeps all the accessories close at hand, so you can take your kit anywhere. Did you say complete?

Cut the cord! If you're used to wired microphones and want to go wireless, go ahead and do it with peace of mind! This amazingly simple analog system automatically scans the available frequencies (UHF band), synchronizes the transmitter and receiver with its QuickScan feature, and offers up to 14 hours of continuous use. Uncompromising audio quality. Equipped with a PG58 capsule, this set is ideal for speeches, animation or karaoke. Shure's wireless transmission retains the audio clarity and intelligibility that make its microphones the benchmark for live performance. Choose freedom of movement with an easy-to-use system that provides a range of up to 80 meters under ideal conditions. Broadcast good vibes... With the reduction in the number of frequencies available for the use of wireless systems, it becomes more and more difficult to find your way around. However, the M17 band (662-686 MHz) of this system allows legal use in France, even after the deployment of 4G (by 26 June 2019 at the latest). 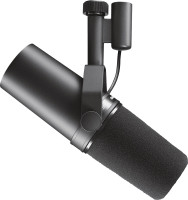 A bulletproof armour plating! With a comfortable weight of 765 g, the SM7B is fully protected by a strong metal shell, a shield that makes it immune to magnetic radiation from mobile phones, speakers or neon lights. This neutralizes interference and noise. In addition, it benefits from an internal pneumatic insulation that almost totally attenuates mechanical handling noise. It comes with a first classic windscreen and a second one, called A7WS, specially designed for close pickup, which drastically reduces breathing noise, even in the case of voices with low volume. The warmth of FM! With its dynamic design, the SM7B has a large capsule that gives it great sensitivity. This explains why it also perfectly reproduces the characteristic atmosphere of warm and dynamic FM voice pick-ups, with beautiful, precise bass. For easy placement, the SM7B is mounted on a sturdy hinged clamp with a standard microphone stand adapter, which ensures that the SM7B is extremely stable to adjust. Uncompromising features. With a wide frequency response curve from 50 Hz to 16,000 Hz and excellent dynamic consistency across the entire spectrum, the SM7B withstands high sound pressure levels, making it highly effective for picking up instruments at high volume levels. It has a sensitivity of -59 dBV/Pa. Its very pronounced cardioid directionality further enhances the purity of the pickup, ensuring ideal focus and a high level of detail thanks to the effective rejection of off-axis sound. Finally, it has a bass attenuator and a midrange amplifier that can be switched by a switch: totally indispensable for the voice! 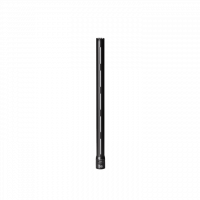 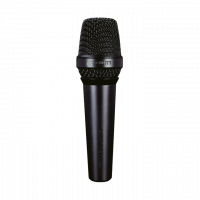 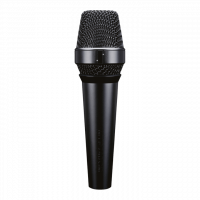 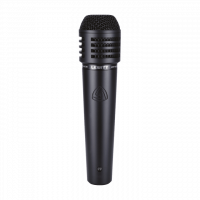 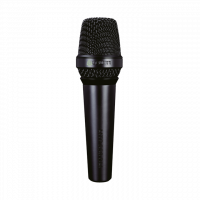 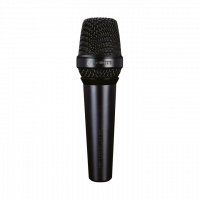 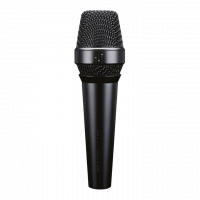 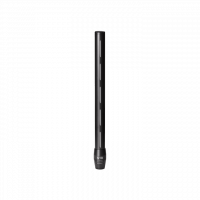 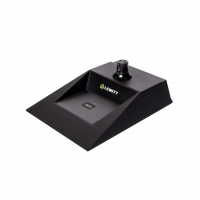 Conference Micro Lewitt B 70 AS 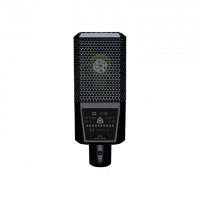 The Lewitt DGT 450 USB condenser microphone is a Lewitt DGT 450 that delivers unsurpassed quality - anytime, anywhere. Pure condenser sound captures your voice in studio quality. Perfect for traditional voice recording, voice-over, podcasting, and streaming. Courtney Taylor, who has worked with Pharell Williams, Robin Thicke, A $ AP Rocky: "The sound captured by the DGT 450 is incredible: what you hear is what you get on the recording." 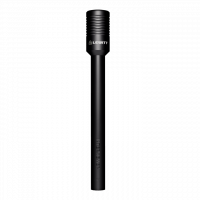